If you have been researching the insurance industry then you would have come across Lloyds of London.

Lloyds of London, also known as just Lloyds, is an insurance and reinsurance market based in London. It is not an insurance company, instead, it is a marketplace where insurance buyers and sellers come together. It essentially acts as a market regulator which sets rules under which its members operate.

Based on Lime Street in Central London, Lloyds originally began as a coffee house in the 1600s. The coffee house became popular with sailors, merchants and ship-owners as Lloyds would offer them reliable shipping news.

In 1691, a small group of marine insurers relocated to Lombard Street and in 1713, the participating members of the insurance arrangement formed a committee called The Society of Lloyds. And so Lloyds of London was born.

What is the Lloyds Act?

One of the key things that sets Lloyds apart is that it is governed by the Lloyds Act of 1871 and subsequent Acts of Parliament.

The first act was passed in 1871 and gave it sound legal footing as a syndication. However, at this time it was unusual for a Lloyds syndicate to have more than five or six backers, and it meant that they were losing business to other larger insurers. Frederick Marten, a marine underwriter created the first “large syndicate” which was initially 12 capacity providers .This syndicate soon became larger and outgrew many major insurance companies outside of Lloyds.

Another Lloyds Act in 1911 set out the Society’s objectives including the promotion of its members interests and the collection of information.

Lloyds of London is the oldest continuously active insurance market place in the world. There were subsequent Lloyds Acts and continues to be governed under the Acts 1871 through to 1982.

How is Lloyds of London split up?

Lloyds of London is in charge of the management and supervision of the market. It has five key participants; syndicates, managing agents, brokers, cover holders and insurance buyers.

Syndicates function like small insurance companies. They assume risks and pay claims. Each syndicate is made up of one or more members, of which can either be individuals or corporations. These members provide financial capital that allows the syndicate to operate. They then assume risk, but only a percentage of that risk. This can vary in size, but can be up to 50% of the overall risk.

It is important to note that each syndicate specialises in a certain type of risk.

Who are managing agents?

The Managing Agents are responsible for the hiring and overseeing all essential staff including the underwriter and accountants as well as managing their daily operations.

The brokers at Lloyd’s of London act like all brokers and work independently to arrange deals between clients and insurers. They also advise clients on the most appropriate policies for them.

Brokers at Lloyd’s match the appropriate syndicate to the buyer, and must be approved by the Corporation of Lloyd’s to be allowed to work in the marketplace.

Who are cover holders?

The cover holders are the companies that underwrite insurance policies for managing agents. These work outside of Lloyd’s and do business that isn’t done by brokers. Cover holders allow Lloyd’s to operate globally and are given specific authority to transact certain business in the marketplace.

Who are insurance buyers?

The insurance buyers are the individuals and corporations buying the insurance. If a traditional insurance provider does not provide the insurance you need, you will be able to find insurance sellers at Lloyd’s. For example, you may have heard celebrities insuring their hands, legs or vocal chords and the chances are, they would have found insurers at Lloyd’s of London.

Does Lloyd’s of London recruit graduates?

Now you know what Lloyd’s of London is, what it does and who the key players are, do they recruit graduates?

Lloyd’s of London do offer a two year graduate programme for those looking to pursue a career in insurance. There are three core programmes; Insurance, Business and Actuarial, of which involves four, six-month placements enabling you to choose which area you want to work in.

If university isn’t for you then you may be interested in the Lloyd’s Apprenticeship Programme. There are two schemes, Business and Insurance, of which range from between 18 months and 4 years in length.

You can find out more about opportunities at Lloyd’s here.

In conclusion, Lloyd’s of London is a market place, regulated by the government, and sets the standard for insurance companies. It is not an insurance company, but instead is a global hub for insurers. For more information about the different types of insurance, read our areas of work article. 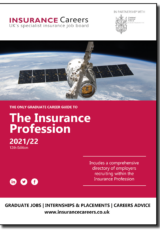