Royal London is in negotiations with LV= regarding a tie-up, saying that an agreement could be reach within days.

The transaction could be worth between £500 million and £1 billion, and would create a “mutual champion” that would serve nearly 10m customers in the UK.

Who are Royal London?

The Royal London Mutual Insurance Society Limited is the largest mutual insurer in the UK. The Group was founded in 1861 and has funds under management of £130billion and with 8.8 million policies.

A merger with LV= would enhance Royal London’s standing as the UK’s biggest mutual life, pensions and investment company.

LV=, or Liverpool Victoria was founded in 1843 and is one of the UK’s largest insurance companies, with over five million customers. They manage assets of £14 billion.

In June, LV= launched a strategic review after it sold its general insurance business to Allianz. Should the merger go ahead, it will end LV=’s 177 year status as an independent business.

What does the tie-up mean?

Sources say that the transaction would bring together the pensions, life insurance and asset management businesses of the two.

Should the tie-up go ahead, Royal London will finance the purchase using the proceeds of a £600m debt-raising from last year, according to sources. 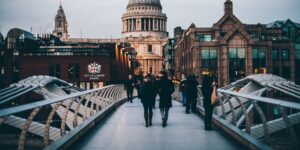 If a deal is to be struck, the overlap of their products could mean that the LV= branding disappears from the market. Between them, they employ around 6,000 people, two thirds for Royal London.

LV=’s members, 1.1m of them, are expected to be asked to vote on any transaction. If they vote to go ahead with the deal, the deal will not be closed until next year.

This is the latest move from Royal London that cements themselves as the UK’s biggest pensions and investment company. In June, it announced that it would take on Police Mutual.

Only time will tell whether the tie-up will go ahead.